Wings of an Angel 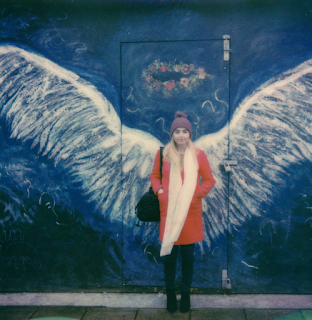 This morning I was out on a bicycle ride.  I had forgotten how fun it is to use a 30 minute bike lap as an excellent workout.  After a ride with my nephew a few weeks ago, I again got the bicycle bug and have been going steady ever since.  Well, back to this morning's ride.

Moving rather quickly on a flat stretch of road, under some old leafy trees, I came upon a flock of crows eating bread crumbs from the street.  As I approached, they scattered with abandon, except for this little squirrel taking advantage of the fact that all of the birds had quickly left.  At the last moment, the squirrel darted in front of my bike and off into the bushes.

As often happens on bicycle rides or runs, this particular event brought to the front of my brain a vaguely similar situation that happened to me sometime during the latter part of 1995, amidst the precipice of my using days.

In the morning I would report to the mid-town pharmacy where I was working just before 8am.  After helping to get the store opened and moving, I would head cross town to the west-side pharmacy where I would open the store at 9am and work until close at 6pm.  The main roads were always a bit crowded, so I enjoyed taking some side streets, through the neighborhoods, working my way through downtown, past the high school and up to the west-side pharmacy.

This one particular morning, I came to a stop sign at a 4 way stop that would lead down the hill and through town.  When I came to a stop in my 1972 powder blue International Harvester Scout II, I noticed there was a cat lying in the intersection.  Upon quick further inspection, I could see that the back half of the cat had been run over and was basically flat on the road.  With what little life it had left, the little cat was trying to push up with his two front legs to pull himself.

Wright or wrong, I made a decision in that split second that I could not let that cat suffer one more moment.  I pulled from the stop sign and with my large 4X4 tires, drove right over the top of him to instantly relieve his misery.

At that moment, out of the corner of my eye, I see a young women sitting behind the driver's seat of a small sedan at the stop sign to my left.  To this day I can still see the look of horror over her face being the only human witness to the mayhem just committed in front of her.

To digress, if you have read any of my other recent writings, you have a little understanding that during the few years leading up to 3/11/1996, my life was falling apart due to an ever increasing need for opiates and cocaine and a continually increasing stream of lies.  This split second decision to run over the mutilated cat followed by the look of horror from the young lady witness, I am sure, was a jolt from my higher power to get my act together.

Within seconds of pulling away from the intersection I could physically feel large feathery wings reaching around my entire body and holding me with the words, "It's going to be all right" coming into my head.  This was my guardian angel, my passed mother.  Over the next 4 or 5 months, or however long it took until that moment where I called for help, she was with me.  I could feel her presence, watching me, continually trying to guide me.

There was a moment about 6 months after I became sober.  I was sitting in the kitchen and I can't remember what it was that we were discussing or specifically doing; however, it was crystal clear, in that moment, that my guardian angel, my mother, knew I was going to be safe and she left.

We all have moments, a feeling someone is sitting next to us.  We find something right in front of us that has been lost for days.  Suddenly a concern for someone we haven't thought about for weeks.  Do we just take these moments as happenstance, or, are we open to listening to hear what they have to tell us?

Get ViewpointRx delivered to your email